Since its inception, Instagram has always been my favorite social media platform. Depending on whom you follow, it’s nothing but positivity and beauty. There isn’t any room for complaining or bragging or political mumbo jumbo. I love it.

Last weekend, we made plans to travel to the the southern part of Bavaria, hoping to enjoy the last of the fall weather near the Alps before winter. Our plan was to make a stop just past Munich near the Starnberger See and then continue driving past the Walchen See and the Kochel See on the way to visit the Eng-Alm in Karwendel. An Alm is a place where cows are taken to the high mountains in the summer to graze. During the summer months you can get fresh cheese, milk and other dairy products at the Alm. The weather was supposed to be gorgeous, classic fall–not too cold with bright sunshine. Well…in a way I guess you could say it was ‘classic’  because it was super foggy and totally drizzling when we left. On the bright side, it already seemed like a great day to me when we successfully left the house at 7:30am!

Thorsten had an appointment and I had plans to meet up with a new friend for coffee. Introduced a few weeks prior, she is the author of the beautiful food blog, Changing Plate.  We met via Instagram. I found out about her blog when she took over an Instagram account I happen to follow called @iambavaria. Every two weeks a new person, who lives in Bavaria, takes over the account and showcases their Bavaria. When she took over she introduced herself, and mentioned that she is from the East Coast of the USA. I realized we were from the same region and commented on her post, saying so and we started to chat.

Here was an American, who married a German, moved to Bavaria and has a blog–sound familiar? (Maybe I am not as original as I thought…) Oh well, add to that she misses Chesapeake Bay Blue Crabs too, and you certainly have the ingredients for a friendship. We decided to meet in the cute seaside town of Seeshaupt, and used Whatsapp to find eachother. Our coffee “date” was fun, we made plans to meet again and said, “Auf Wiedersehen.” Now I have Instagram to thank for pretty pictures and for friendships as well. Makes the world seem a little smaller and more connected in a good way instead of a creepy one.

This was a momentous occasion because this was the first time I interacted socially with another American since moving to Germany. To start with I just don’t run into that many Americans. In the beginning that was hard, but now I’m kind of thankful. I think speaking English all the time would have really slowed my German learning and general integration. But now it’s been more than a year so I think it’s ok.

We left Seeshaupt and headed south. The drive was winding and hilly. We took a scenic toll road that was closing for the season the very next day. And what do you know? The weather really turned around. The fog lifted, the sun came out and it was the perfect day for driving. The sunshine bounced on the edges of water of the Walchensee, where the view never gets old and the fall foliage was magnificent.

The Alm is located at In der Eng. Eng means tight or narrow in German. The area is

called Eng because as you get closer to the Alps the area gets more and more narrow. The Alm is nestled in a tiny slice of flat ground at the foot of the mountains. To say it’s picturesque is truly an understatement.

What was even cooler was the stand of Maples, the eldest being between 300 and 600 years old. (I didn’t even know Maples could live that long.) I was pretty suspicious too because the bark looked like sycamore bark and sycamores have a habit of growing large at a fast pace, hollowing out in the middle and looking old when they really aren’t very old at all. It was already late enough in the season that there were almost no leaves left on any of the trees and so at first I wondered if they were all dead. But then I examined those leaves on the ground to see if they were really maple. After some research I discovered the reason for the similar look: These are Sycamore Maples. This land has been known for Maples and used for pasture since the 10th century. There was a short period during the 30 years war (around 1618) 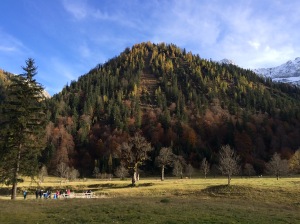 when no grazing occurred and this allowed the current Maples to really to take hold. It become a protected area in the 1920’s and the Maples are now managed and replanted one by one so that they will continue to be enjoyed for generations. I couldn’t get a decent shot, but truly, it looked like something out of Lord of the Rings– a crowd of very tall people (or Ents) standing, spread across the very flat ground at the foot of the mountain.  I would love to see them mid summer when they still have all their leaves. (Here is a link about this area called “Ahorn Boden–the Maple Floor” but it is in German so you will need to use google translate to read all the details.)

The last thing we did was stop in Munich for lunch. Thorsten remembered a great, kind of posh, Italian place near the Maximillian Strasse. They just happened to have a table that could accommodate us and our stroller and we were in!  It couldn’t have been more perfect until we noticed that sitting at the table right in front of us was Pep Guardiola, the coach of Bayern-Munich, our favorite soccer team! They were just finishing their lunch, and left very shortly after we arrived, so sadly we had no time for photos. Oh well, next time! #instagram @instagram