We just returned from a trip to the states which explains my two week hiatus. Still there is always something to report, so here is the latest…

As I’ve mentioned in previous posts, Thorsten and I are big fans of taste tests.  Thorsten specifically is a big fan of hamburgers and so we’ve made something of a project out of trying different Hamburgers and rating them. Often this happens in the US and isn’t always a planned taste test but we’ve collected our opinions and will share them with you here. 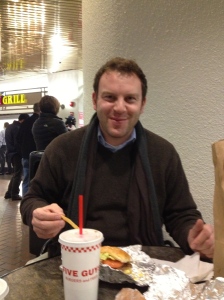 We started in 2013 at Five Guys in Washington, DC.  Delicious burger.  No complaints.  Very nicely grilled, lots of flavor in the meat, good ratio of bun to patty and other toppings, warm bacon, and perfectly cooked. They give you tons of fries and the fries are pretty good, but I find that if you eat the burger alone you can better appreciate the taste of the actual burger.  So, I recommend skipping the fries or at least waiting til you are through with the burger to eat them.

About six months after Five Guys we stopped a Wendy’s near Pittsburgh, Pennsylvania. I remembered Wendy’s from when I was a kid as a place with delicious thin pattied burgers and great Frosties.  I wasn’t expecting anything marvelous, just maybe a nice throw back.  Sadly this was disappointing. First of all, it seems Wendy’s has changed their burger patties to compete with places that are serving thicker patties as their specialty.  So the Wendy’s Wopper has nothing special about it. It is not actually thin but it isn’t thick either.  It also had no taste.  I ordered a small cheeseburger and I didn’t even finish it.  The fries were surprisingly good, but this post is only about hamburgers.

It is interesting to note that there is a Wendy’s situated directly next to one of my favorite places in the world: Doumar’s Cones and BBQ in Norfolk, VA. Doumar’s grinds its own beef, has thin patties that are grilled, and come out fast, but in my opinion, they are tasty!  For me they are the perfect size, but Thorsten definitely has to order two. I always order a Cheeseburger Deluxe: a patty with cheese, lettuce, tomatoes, mustard, mayonaise. Thorsten only gave it a 2 stars out of 5 because he thinks a thin patty becomes overwhelmed by the toppings but wishes it to be known that the fact that it garnered stars already moved it into the league with gourmet burgers. I like the flavor and they are consistently good.  You don’t feel like you are so full you want to die after you eat it. Well that is until you eat the ice cream but that is not the burger’s fault. Doumars fries are nothing to write home about but they do round out the meal.  This post is about burgers though so let’s move on. I always thought that Wendy’s was competition for Doumar’s but after I tried the Wendy’s burger I can see that even on opposite sides of the street there is no contest.

Next we visited Red Robin in Lancaster, PA.  Red Robin is known for it’s never ending thick steak fries. Never ending is good but I’ve never actually been impressed with the taste of the fries so I never end up ordering more, making this benefit kind of a mute point.  Nevermind the fries, Red Robin is also known for burgers so we gave them a shot. In this case it was a bacon cheeseburger. The burger itself was not so bad. It was a quality patty of meat, however, the server did not ask whether it should be well done or not and the bacon was cold and seemed it had been cooked before and refrigerated. So the consensus there was that it’s not bad but doesn’t live up to the hype. We actually tried Red Robin twice and both times the “pay at your table machine” didn’t really work.  Nothing to do with the burger, this was just kind of annoying.

Next we had burgers at a place called Baker’s Crust in Virginia Beach, VA.  Here the burger was also good enough to use a star system.  Thorsten rated it a 4 out of 5 stars! It was large enough to fill him up and had a good combination of flavors and a good ratio of toppings to bun to burger. I tend to think the bun is too big and I end up having to dissect it to get it in my mouth.  For me this is where burgers can lose stars. Still we’ve visited Baker’s Crust more than once and Thorsten always goes for the burger so this is a good bet. 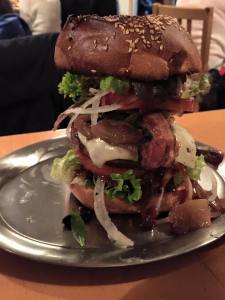 About a month ago we tried Burgers in Nuremburg and a little burger shop called Hempels. These burgers were huge and according to Thorsten a 5 out of 5. From my perspective they lost points on being too huge and really requiring a dissection with a fork and a knife but the burger itself was great.  Really nice meat, thick, flavorful patty, grilled to perfection.  I had to leave a ton of food on my plate though as the inside of the burger came out and I couldn’t eat the whole bun and finish the burger.

Recently, we were in Texas and decided to try Whattaburger.  On the inside Whattaburger has decor that looks similar to a McDonalds but surprisingly that is where the similarities end.  First of all, it was really clean, then the people were very friendly and attentive.  Next the burgers are really big!  And have a taste.  I got so excited about this that I forgot to take a photo. The counter person even brought us our burgers when they were ready so we didn’t have to just stand there waiting. We were all around sweetly surprised and even impressed with this fast food burger.

So, in conclusion, Five Guys is Thorsten’s winner.  While he continues to give others a shot, he probably gets one Five Guys burger everytime we are in the states.  He says they are consistent and he has never been disappointed. So after visiting a number of times, Five Guys gets 5 stars from Thorsten. I have to agree that Five Guys is high on the list. The flavors meld well and you can always manage to get all the good flavors together in the perfect bite.

Last but not least is my winner.  The Hamburger I had in Hamburg.  This burger surpassed any I have tasted in my life. This was in a fancy department store called Alsterhaus. Inside there is an entire floor dedicated to gourmet food.  One of the restaurants is actually a local butcher shop called Beisser.  There was only one burger on the menu.  It came with cheese, bacon, bbq sauce, and carmelized onion.  I was nervous about the onion and the BBQ sauce because in my mind, bbq sauce is often too sweet and overwhelms the flavor of the meat. Not so in this case.  The bacon sliced thin, so it was easy to bite with the burger. It was scooked until it had just a tad of crunch on the edges, it was then added to the carmelized onion and bbq sauce. Then altogether they were added to the burger. The flavors melded perfectly. The patty was made to order, I ordered medium.  The bun was a delicious flavor and texture, not just a tasteless bread made into a bun shape. For me it was the first time in my life, where I experienced the perfect ratio of bun to burger to toppings, absolutely perfect. The real proof was that I ate every bite. The entire burger bun and all. There wasn’t a mess left on the plate of things I didn’t like, couldn’t fit, etc.  I ate this burger two days in a row!

The taste test will continue as neither one of us has yet been able to get to an In and Out Burger.  Next time!